1. Why did you become a teacher?

After spending some time in corporate America, I was longing to work in a place where I could see a positive impact around me. I was lucky to have an advanced degree, so when an opening came up at my local college, I contacted them and pursued the position.

2. What is your greatest teaching moment?

I was lucky enough to get to start a boys volleyball program at the college level. My first year we had a student with no experience and a lower than average fitness level, but as a new program we took the chance. I quickly learned that he also had struggles socially and academically, and there was a chance that he wouldn’t make it here for 4 years. Luckily, there was a spark in him when he was able to be part of a team sport, so I assured him that he would have a position through graduation no matter how much the team improved, so long as he met with me regularly, set some goals, and put in the effort.

Despite some nervous moments, that student just graduated, having been a contributor to our team all 4 years. He had developed good friendships, improved his eating habits (he still laments the “summer without bacon” pact he made), and in our final awards dinner we even got him dressed in a sports jacket and combed his hair! In the end, this anti-social guy’s life was changed forever by this experience, and I don’t care if I win another match if it means I can’t work with guys like that.

I’ll try –probably more funny for me than others. A couple years ago, my players came to my house to carve pumpkins for Halloween, and a small group quickly hid in the corner, mandating that I stay away until they are finished with their pumpkin. The next 3 hours, while the rest of us ate chili, told stories, and baked pumpkin seeds (the other 6 pumpkins were already done), the Davinci three worked with total focus.  At the unveiling, it turned out that they’d been carving my face into the pumpkin. Their favorite detail, besides somehow nailing the goatee, was that they included these two lines in the lobe on each side. I thought it was horns, but they pointed out that it’s the veins that bulge in my bald head when I’m not happy with them. I don’t yell as a coach, but apparently this was their sign that they needed to work harder –veins out, time to focus! It was amazing how no little detail gets missed.

On a side note, the pumpkin stayed on the porch for 4 weeks, where I got to see a time lapse of my own aging process –from fresh faced to slightly wrinkled, to full crypt keeper.

4. What is your advice to parents?

There’s no guarantees, so relax and have fun with the chaos! I’ve seen parents try so hard to guide/control/help/support their kids to maximize their potential, and I’ve seen parents have fun and let the kids find their way. Both groups of kids tend to end up in the same destination, becoming the adults they were meant to be, but the latter group need a lot less therapy.

5. What is your advice for teachers who are just starting out?

If your values are good, you can weather anything. I’m one who obsesses about improvement, so it’s taken a long time to just accept the ups and downs, accept the imperfections, and keep having fun.

6. What is your favorite children’s book? 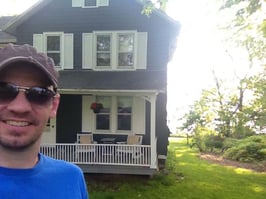 Richard's Bio: My experience is mainly at the collegiate level, where I taught English, Theatre, and Greek Mythology for 6 years before becoming a full time collegiate volleyball coach. I graduated from Cornish College of the Arts with a BFA in acting, and did my masters in Mythology at the University of Bristol in the UK. I currently coach at Wells College in the finger lakes of upstate NY, where I’m lucky enough to live on Cayuga lake just a short walk to the office. Because of this, my team comes over to play with my dogs, and have taco Tuesday with me and my wife when they’re homesick.